This post contains affiliate links. As an Amazon Associate I earn from qualifying purchases. 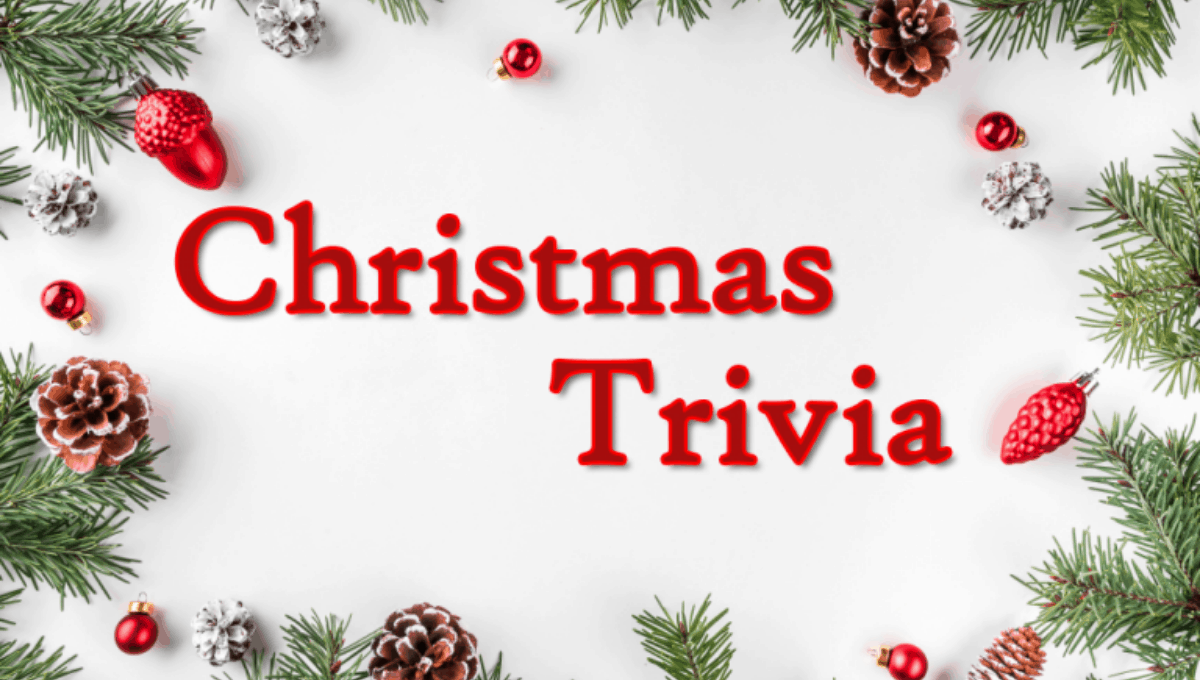 If you have ever wondered where some of the original Christmas traditions came from, then you will learn what you need to know in this article!

Why do we hang mistletoe and eat ham? Who decided eggnog was a good idea for a drink and what inspired the angel on top of the tree?

We have all the answers to those burning questions right here… See if you can impress your family with some Christmas trivia! We have broken our Christmas trivia game into categories:

These are all the best Christmas trivia questions – some are hard, some are easy, all of them are about our favourite holiday – Christmas! Check out more Christmas activities and quizzes here.

Q. Why do we celebrate Christmas?

A. Christmas is celebrated to remember the birth of Jesus Christ, who Christians believe is the Son of God.

Q. Where did the word Christmas come from?

A, The name ‘Christmas’ comes from the Mass of Christ.

Q. Where did Santa originate?

A. The legend of Santa Claus can be traced back hundreds of years to a monk named St. Nicholas. It is believed that Nicholas was born sometime around 280 A.D. in Patara, in modern-day Turkey.

Q. Why do we celebrate Christmas on December 25?

A. In A.D. 350, Pope Julius I, bishop of Rome, proclaimed December 25 the official celebration date for the birthday of Christ.

Q. Why does Santa have reindeer?

A. The mythical stories of the Norse narrate the tale of Thor, the god of Thunder who flew through the stormy sky in chariots drawn by magical goats termed Gnasher and Cracker.

Q. Why partridge in a pear tree?

A. The partridge is said to be a symbol of Jesus and the pear tree refers to the tree of life that is the cross.

Q. Christmas Island has an annual migration of which animal?

Q. How many gifts in total are mentioned in the Twelve Days of Christmas?

Q. What century was the first written use of “Xmas”?

A. The letter “X” has long been used as an abbreviation for Christ since the 16th Century, the Greek word for Christ begins with what looks like an “X”.

Q. Which country started the tradition of putting up a Christmas tree?

A. Germany is credited with starting the Christmas tree tradition back in the 16th century when devout Christians brought decorated trees into their homes.

Q. What is the tallest Christmas tree ever?

A. The tallest Christmas tree ever displayed was in Seattle, Washington. It measured 221 ft tall.

Q. Why do we put an angel on top of Christmas tree?

A. Because angels appeared high in the sky on the first Christmas, people began placing angels high on the top of their trees as a way to celebrate the birth of Jesus.

Q. Did Rudolph The Red-Nosed Reindeer start off as a marketing gimmick?

A. Rudolph the Red-Nosed Reindeer did first appear in 1939 when the Montgomery Ward department store asked one of its copywriters to create a Christmas story the store could give away as a promotional gimmick.

Q. Where did the Candy cane tradition start?

A. Candy canes were shaped to resemble a shepherd’s staff, as a way to remind children of the shepherds who visited baby Jesus.

Q. Did Coca-Cola play a part in Santa’s image?

A. Yes, in 1931, the beverage company hired an illustrator named Haddon Sundblom for magazine ads and Santa images become a lot more jolly.

Q. When did the Elf on the Shelf game first begin?

A. In 2005 Carol Aebersold and her daughters, Chanda Bell and Christa Pitts. It is based on their family’s own Scandinavian holiday tradition.

Q. Why do we hang Christmas wreaths?

A. The Christmas wreath originated as a symbol of Christ. The holly represents the crown of thorns Jesus wore at his crucifixion, and the red berries symbolize the blood he shed.

Q. Where did Candy canes originate?

A. A choirmaster originally gave the candies to young children to keep them quiet during long church services. It wasn’t until a German-Swedish immigrant decorated his tree with candy canes in 1847 that they became popular as a Christmas candy.

Q. Why do we hang Tinsel?

A. Tinsel was invented in 1610 in Germany and was originally spun from real silver, making it far from the plastic decoration it is now.

Q. Where did the tradition of Christmas lights begin?

A. Christmas lights — lit candles — began being used for holiday decoration in 17th century Germany. Germans developed a tradition of attaching lit candles to the branches of trees (fire hazard anyone?) with melted wax and pins. They also placed burning candles in their windows to designate their homes as Christian and as places of worship.

Q. How did the Christmas stocking tradition begin?

A. Christmas stockings allegedly evolved from the story of three sisters who were too poor to afford a marriage dowry and were, therefore, doomed to a life of prostitution. They were saved, however, when the wealthy Bishop Saint Nicholas of Smyrna (the precursor to Santa Claus) crept down their chimney and generously filled their stockings with gold coins.

Q. What do the traditional Christmas colours symbolise?

A. The traditional three colors of Christmas are green, red, and gold. Green has long been a symbol of life and rebirth; red symbolises the blood of Christ, and gold represents light as well as wealth and royalty.

Q Why do we kiss under the mistletoe?

A. Mistletoe was an important part of Celtic and Norse religion and became intertwined with Christmas. Mistletoe is thought to have an association with fertility, which is one possible origin.

Q. What is the real meaning of Boxing Day?

A. December 26 was a day off for servants of the rich. To thank them for their service, masters would package up or box gifts to give to their employees. Find out the full story of the meaning of Boxing Day here.

Q. When should you take down your Christmas tree?

A. According to superstition you should take down your tree on December 31st before midnight, to avoid bringing misfortune from the old year into the new. However Christian Tradition says the decorations are meant to be taken down on the “Twelfth Night”.

Q. Why do we wrap Christmas gifts?

A. The wise men wrapped the gifts they brought to baby Jesus, although they enclosed their gold, frankincense, and myrrh in small treasure chests rather than in paper. This is likely why we associate gift wrapping with Christmas.

Q. Why do we send Christmas cards?

A. Sending Christmas cards started in England in 1843. Before this time, people used to send private notes wishing Merry Christmas. Sir Henry Cole was a busy man and did not have time to write a personal message for Christmas so he hired an artist called John Calcott Horsley and got him to design a card which could be sent off straight away.

Q. What country has the tradition of filling children’s clogs with candy and treats on December 5?

Q. How long does it take for a tree to reach average, ideal “Christmas tree” height?

Q. When was the first Australian Carols by Candlelight?

A. The first Australian Christmas tradition of Carols by Candlelight began in Melbourne in 1937.

Q. When was Australia’s worst Christmas?

A. Australia’s worst Christmas was in 1974, when Cyclone Tracy devastated Darwin in the Northern Territory. More than 60 people were killed.

Q. What is the biggest Christmas light display in Australia?

Q. How did Christmas carols get their name?

A. The word carol is believed to be derived from the French “carole” or the Latin “carula” meaning a circular dance.

Q. When was the first Australian Carols by Candlelight?

A. The first Australian Christmas tradition of Carols by Candlelight began in Melbourne in 1937.

Q. The best-selling Christmas song ever?

A. The best-selling Christmas song of all time is Bing Crosby’s White Christmas, according to the Guinness Book of World Records.

Q. Name 3 of the 10 most popular songs according to Spotify:

Q. What is the most popular Christmas movie?

A. Home Alone is the biggest Christmas movie ever, raking in $533 million globally. Jim Carrey’s Grinch comes in at two, bringing in $260 million with Home Alone 2 coming in third.

Q. In Home Alone where does Kevin’s family go for Christmas

Q. What is the name of the head Elf in The Santa Clause

Q. Finish this line from How the Grinch Stole Christmas ‘It came without packages, boxes or ?????’

Q. What Christmas food lasts the longest after Christmas?

Q. Why do we eat turkey at Christmas time?

A. In the early years Turkeys were cheaper to raise than other birds.

Q. Why do we eat Ham at Christmas?

A. A boar’s head was the edible centerpiece on the wealthiest holiday tables in Tudor England. For those poorer families a Yule ham took the place of the boar’s head, as it was more affordable and equally delicious.

Q. Why do we eat Plum pudding?

A. The tradition of eating plum pudding on Christmas is believed to have originated with a Roman Catholic Church decree to make a 13-ingredient pudding to represent Christ and the apostles.

Q. When did the Eggnog tradition begin?

A. Eggnog seems to have first been sipped in 1607 in the British colony of Jamestown, Virginia (USA).

Q. Why do we leave Cookies for Santa on Christmas eve?

A. In Germany, apples, cookies and other food were used to decorate the festive tree: some of these decorations disappeared during the night which led to speculation that it was Santa looking from some late-night snacks when leaving the children their presents.

Q. Why put a coin in the Christmas pudding?

A. Finding a Christmas coin in your slice of pudding is believed to bring good luck and especially wealth in the coming year.

Q. What is the significance of the Yule Log?

A. The popular cake symbolises the log you should burn on Christmas Eve. If the log goes out before the morning, it is believed you will face bad luck in the new year.

Q. What Country is KFC popular at Christmas?

A. KFC is the most popular meal for Christmas in Japan.

How many did you get right? Give yourself a point for each one and see if you can beat the rest of your family.

Counting down the days to Christmas? Check out these advent calendars:

Join our Facebook group to jumpstart your Christmas planning all year long!

1 thought on “Christmas Trivia Questions and Answers for Everyone!”

A Few Of Our Favourite Things…